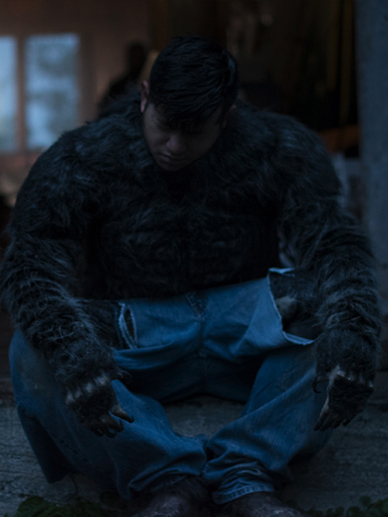 That’s a wrap on our newest short film ‘White Drift.’ Since I was a little kid, I’ve dreamed of making a were wolf film, and now I can say that I’ve done it. What a process! We started off day one with some exteriors, and dove right into some strong character development with actor Sean Carmichael. Sean is a fantastic actor to work with, and really commits to the part he’s playing. As luck would have it, we had a beautifully overcast day, giving us the perfect amount of diffused light.

Day two was the longest day of production. During this overnight shift, we shot an FX heavy scene with our Werewolf, which was a combination suit and head. When we first arrived on set early in the afternoon, the sky opened up and began to rain heavily. This added some nice production value to the opening shots of Sean bathing in the river. From there we moved to Director of Photography Kenn Gonneville’s Barn to shoot an FX heavy scene with Damian Maffei. Once that was a wrap, we headed back to Gorham where we would bring our wolf to life. Initially the final confrontation was set to occur outside by the barn, but with the rain increasing in intensity, we opted to move the showdown inside. Talk about luck. The aesthetics of the barn’s interior provided the right, creepy atmosphere for the film’s climax.

With the FX now in the can, days three and four were a breeze. During this time we occupied Uncle Andy’s Diner in South Portland where we continued to develop the characters of Peter and Abby. We’d like to thank Dennis Fogg, the owner of Uncle Andy’s, for being so accommodating during this process.